The following is a report on Pete Pearson’s recent victory taken from Verdict Search Georgia, a verdict research group.

FACTS & ALLEGATIONS: On the afternoon of March 26, 2010, plaintiff CCR, 48, a chiropractor, was driving on Lenox Road in Atlanta. At approximately 12:45 p.m., a driver directly in front of Robbins swerved to avoid a squirrel. CCR made a stop to avoid a collision, but was rear-ended by a CBS Atlanta news van operated by Joseph C. Holland. CCR claimed injuries to his neck, back, right shoulder and right hip as a result of the impact. CCR sued Holland and Meredith Corporation d/b/a CBS Atlanta (WGCL 46), as Holland’s employer and owner of the van. Plaintiff alleged that Holland was negligent in the operation of rhe van, and further alleged that CBS Atlanta was vicariously liable for his actions. CCR contended that Holland was negligent in following too closely on Lenox Road at the time of the accident. Plaintiff claimed that, had Holland been traveling at a safe distance, the rear-end collision would have been avoided, similar to how plaintiff avoided striking the vehicle in front of him.

Defendants argued that the squirrel that caused the initial driver to swerve was an unforeseen “act of God” that resulted in the subsequent chain of events. Holland claimed that CCR’s vehicle made a sudden and unexpected stop and that the rear-end collision was unavoidable.

INJURIES/DAMAGES: back and neck, degenerative disc condition (exacerbation of), headaches, herniated disc (cervical), rotator cuff injury (tear), and other soft tissue strains and sprains. CCR treated with a chiropractor in South Carolina three days after the accident, presenting with complaints of neck, back, right shoulder and hip pain, as well as headaches. He treated for soft tissue strains and sprains, but claimed his neck condition persisted and worsened. He was diagnosed with a cervical disc herniation. CCR continued treating with chiropractic care and also received epidural injections for his neck. CCR ultimately underwent an artificial cervical disc replacement and claimed his recovery kept him out of work as a self-employed chiropractor for six weeks. He was also diagnosed with a full thickness tear of his right rotator cuff, which he decided to work through to avoid another recovery.

CCR claimed that, while he made a good recovery from his neck surgery, he still experiences residual symptoms to his neck and lower back and that his right shoulder will require arthroscopic surgery. He claimed he was an avid bowler before the accident, but can no longer engage in that and other physical activity. Robbins claimed just under $200,000 in past medical costs and further sought damages for past lost earnings, future medical costs, and pain and suffering.

RESULT The parties negotiated a settlement of $340,000 on the eve of trial.

My comments on this case:

This was a hard fought battle from the beginning. Before hiring me, my client had been offered nothing by the insurer. The reason? In part, because my client’s car looked like it had only been bumped. Here is what it looked like: 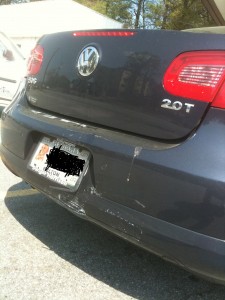 My client and I were able to show that under the bumper cover there was over $7,700.00 in damages.

Another struggle with the case was that my client did not undergo surgery until about a month before trial. He kept putting it off (and understandably so) because he was trying to find a more conservative means to get well AND he was trying to keep his chiropractic practice going.

We settled this case on a Friday. We were first on a trial calendar slated to start Monday morning. That’s what it took to get this case settled – the imminent prospect of trial. I worked on my client’s case for nearly 3 years to achieve this result and I am thankful that in the end my client received far more than he expected from the case.

Attorney Pete Pearson has been working for injury victims for over 17 years right here in the Metro Atlanta Area. Located in the Greater Atlanta Metro Area, he serves clients all over the State of Georgia. You can talk to Attorney Pearson for a free initial consultation by clicking here or by calling him at Six-Seven-Eight 358-2564.